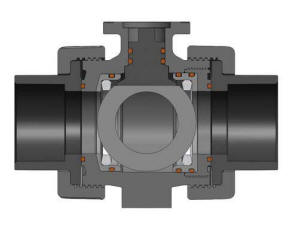 Traditional ball valves have what is referred to as a "floating" ball design, which refers to the ball within being sealed between a pair of "seats" made of Teflon. During the life of the valve the seats may wear due to frequent use or aggressive media, requiring a physical adjustment to keep the seats against the ball. One problematic aspect with adjustments is it often requires a special tool and it directly affects the shaft torque; if the valve is actuated, it is critical to avoid "over-adjustment" otherwise the actuator will not function.

The TBH series ball valve also incorporates a "free floating" ball design; however the patented System2™ seat carrier will never require adjustment. The seat design for the TBH series enables the upstream seat to slide against the ball, forming a backup, secondary auto-adjusting seat seal.  The primary benefit of this design is that the actuation torque is maintained throughout the valve's life, eliminating manual labor associated with seat adjustments for old-fashioned style valves. 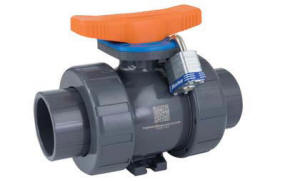 Locking-out valve actuation is an important safety procedure to avoid accidental operation during maintenance or to prevent interruption of critical processes. Unlike many valves which rely on "clamshell-like" enclosures to prevent actuation, the new TBH series design enables up to four locks to be installed simultaneously.  Each of the padlock shackles (shanks) physically prevents valve actuation.  Thus, for no additional cost, up to four lock-outs can be accommodated.

The new TBH series valve body has an ISO 5211 mounting pad, thus if you would like to use your own actuator all you require is a shaft coupling (9, 11 or 14mm) as any actuator having an ISO 5211 mount will connect directly to the valve, eliminating adapter kits required for older valve designs.

The TBH series also has an integral foot pad with hex shaped nut holders for panel mounting and permanent markings in lieu of outdated labels with the part number, size and QR code to instantly link you to its IOM manual. 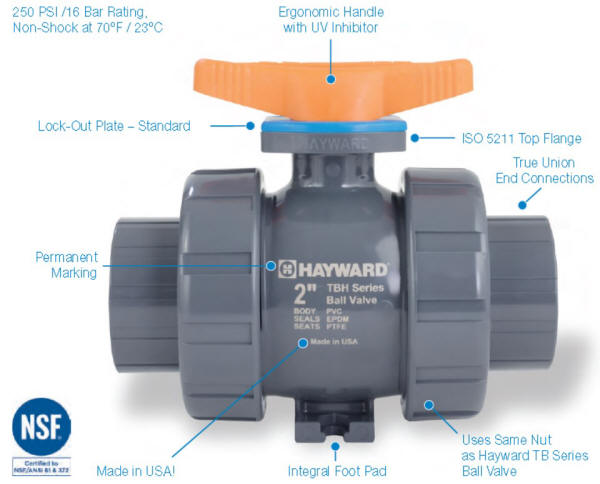 Perhaps an overlooked aspect of ball valve designs, the handle of the TBH series improves usability with an easier grip for either your right or left hand.  You will notice the valve handle curves slightly upwards which enables smaller hands to grip the handle better while raising your fingers a bit above the valve body to avoid "knuckle-busting" contact. Hand slippage is also less of a factor in wet conditions.

The TBH series true union ball valve with System2™ sealing design is fully bi-directional and offered in PVC and CPVC materials with a choice of either EPDM or FPM seals. In addition to two-way ball valves, the Profile2™ proportional flow control valves and "Z-Ball" sodium hypochlorite valves also utilize the new System2™ sealing seat design; having all the features described.

Hayward took what was already a fantastic ball valve design and made it even better by listening to our customer's feedback regarding desirable features and improvements.  The resulting TBH series valve represents an evolution in non-alloy ball valve design.