Design and Capabilities of Gas/Liquid Separators

Design and Capabilities of Gas/Liquid Separators 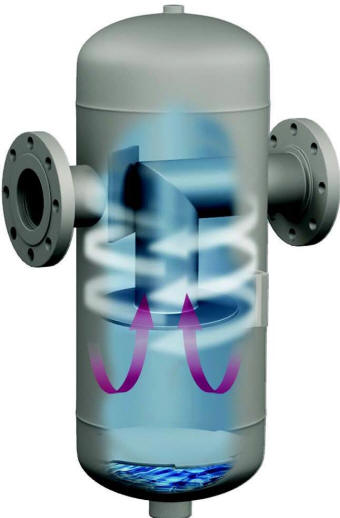 Principle of OperationMoving air, steam or other gas carrying particles of condensed vapor or foreign matter are directed in a straight stream against a baffle such that its flow is suddenly diverted.  The moving steam/air/gas being much lighter than the condensation, will flow around the baffle easily, however the heavier particles of moisture and foreign matter, striking the baffle forcibly, are stopped and fall to a common coalescing area out of the path of the gas flow.A well designed separator must be properly proportioned to provide 99% removal efficiency of particles and droplets >10 microns, meaning the baffle must be of sufficient size and area to collect and carry away the moisture, oil or solid matter in such a manner that it is not re-entrained into the moving steam/air/gas.  Gravity does most of the work, with the gas velocity forcing the separated moisture to cling to the vessel surface where it slowly descends to the drain.  The baffle between the body of the separator and drain is referred to as a vortex containment plate and it prevents re-entrainment and further agitation of the retained fluid.The physical size of the separator must accommodate the proper baffle size in addition to accommodating the sudden change of direction of the gas without causing significant friction or backpressure.  Thus, a properly designed gas/liquid separator has a substantial area at right angles to the flow of the gas.

Physics Involved with our Gas/Liquid Separators

Our gas/liquid separators have an infinite turndown ratio, meaning they maintain their efficiency even when the flow is drastically reduced.  This is beneficial in situations where the start-up or shutdown portion of a process results in lower flow rates.The reason we maintain our efficiency even though centrifugal force decreases with a reduced flow rate, is that the resulting reduction in velocity compensates accordingly for the reduced centrifugal force. Most gas/liquid separators may be in service for several decades requiring zero maintenance as they have no moving, serviceable or replaceable components.  They are a fully welded pressure vessel and considered self-cleaning due to the continuous centrifugal swirling of the gas within the vessel.  It is still advisable to include an inspection port for visual confirmation of any internal contamination, erosion or corrosion.Not all separators employ the same design, most require maintenance for internal mesh pads or fine channels.  Likewise, these other designs lose efficiency beyond a specified turndown ratio.  You will also discover that their physical size and cost increases to provide an equivalent pressure drop. 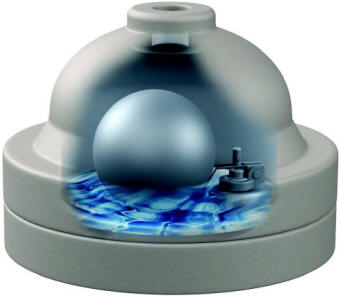 Drainage of Condensate
The condensate may be drained from the separator without loss of any process gas using a float style drain trap.  This mechanical method of drainage simplifies installation and is extremely reliable.

Our float drain traps consist of a cast body containing a valve, valve seat and hollow stainless steel ball ("float").  The float is connected to the valve via a fulcrum and lever.  The separated condensate drains into the body of the drain trap, eventually causing the float to rise sufficiently and lift the valve from its seat.  The system pressure pushes against the condensate and it drains through the drain trap outlet orifice.

Once the condensate level within the trap lowers sufficiently, the float lowers and reseats the valve against its seat.  Thus, condensate within the float drain trap body acts as a buffer or seal, preventing any process gas from escaping during drainage.

It is possible to use a manual or actuated valve in conjunction with a sight gauge to achieve the same effect, however that is more complicated and expensive for most applications.

Float drain traps have a drain port for occasional blow-down if particulate is being removed; alternately, it may be protected with an inexpensive Y strainer.

Since float drain traps always contain liquid condensate, special heaters are inserted for locations where freezing is a concern.

Other industries, such as oil refineries, use gas/liquid separators throughout their process to recover product at specific temperature and pressure points.

Gas/liquid separators are sometimes used to remove a heavy load of particulates, resulting in a sludge-like discharge.  The drain section of the separator changes to facilitate better drainage and a rotary valve is used to minimize loss of process gas.

The rate of liquid removal, expressed as a percentage of the process gas weight flow, is determined by the separator size and design.  The range of removal rates vary from 5% to 90% of the weight flow.  The size and complexity of the separator design increases along with higher removal rates.  The amount of liquid to be removed affects the drain orifice size used in the drain trap.

Removing droplets finer than 10 microns is possible by adding a coalescing stage to the separator design.  The coalescing stage consists of a mesh pad for >4 micron removal.  The fine droplets impinge within the mesh pad, coalescing to >10 micron droplets which are subsequently removed by the separation stage.

The addition of a coalescing stage requires a two-piece vessel to enable access to the mesh pad for periodic cleaning or replacement.

It is possible to remove droplets smaller than 1 micron with the addition of a filter element stage after the separation stage.  These specially designed borosilicate microglass filter elements have a glass matrix drainage layer in support of retentions as fine as 0.30 microns.

The orientation of the inlet and outlet nozzles are another customizable characteristic to support a variety of flow paths.  While horizontal piping is commonplace, sometimes the flow path is vertically UP, vertically DOWN or some combination of horizontal and vertical. 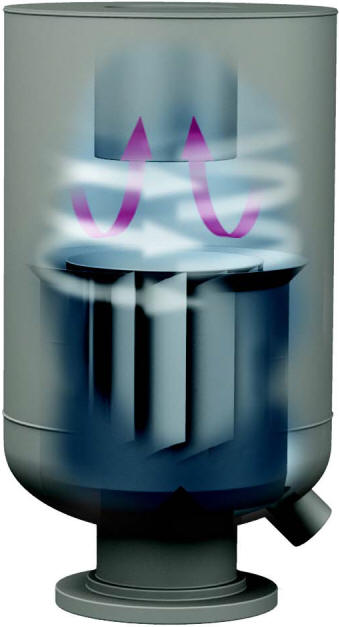 Exhaust Heads
An exhaust head is a special version of a gas/liquid separator used at the end of a ventilation pipe; most commonly for steam applications although sometimes there are exhaust systems other than steam for which it is desirable to remove droplets >10 microns.

One side of an exhaust head is always "open" to atmosphere, which means that it is NOT a pressure vessel; its design pressure is atmospheric despite it being a fully welded item having a flanged inlet matching the class of the corresponding piping.

Exhaust heads reduce the opacity and volume of the condensate plume exiting the exhaust pipe.  Unlike a pressure vessel separator, there is no requirement for a float drain trap and often the condensate is recycled to reduce the consumption of boiler treatment chemicals.

Exhaust heads are sometimes referred to as "silencers" because, like a muffler, they do reduce the exhaust sound.  However, this is not their purpose, any reduction of sound is attributed to the indirect path required for droplet removal and thus there are no design standards for sizing exhaust heads specifically for noise reduction.

The initial cost of gas/separators are in many ways the final cost, given they operate reliably for decades protecting equipment and improving process efficiencies without need for maintenance.